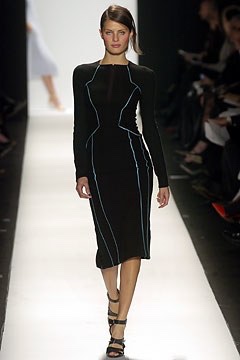 Over the last 25 years globalisation and information technology led to developments in both fields of Fashion and Architecture.

Cavin Kein is known as the contemporary master, if not originator, of minimalist fashion, though with substation dept to designers like Hulston, Yves Sait Laurant, Giorgio Armani, Miuccia Prada and Helmut Lang.

Neutral in color, a modern simplicity that reflects international style of Le Corbusier, Richard Neutra and Ludwig Mies van Der Rohe of the 20s and 30s and the crisp glass curtain wall buildings of 50s and 60s.

Prada also designed several minimal collections but it isn’t an ongoing tendency in his work.

Narciso Rodriguez, on the hand developed a sophisticated minimalist sensibility for his womens wear that owes a great debt to Mies Van Der Rohe. He is concerned about the beauty of the structure just like Mies. Most of his clothings were made with such a great precision that allow to follow the curves of female body without relying on depth and volume. for his garments decoration, he allows the seams and darts to show.

iThere are no comments