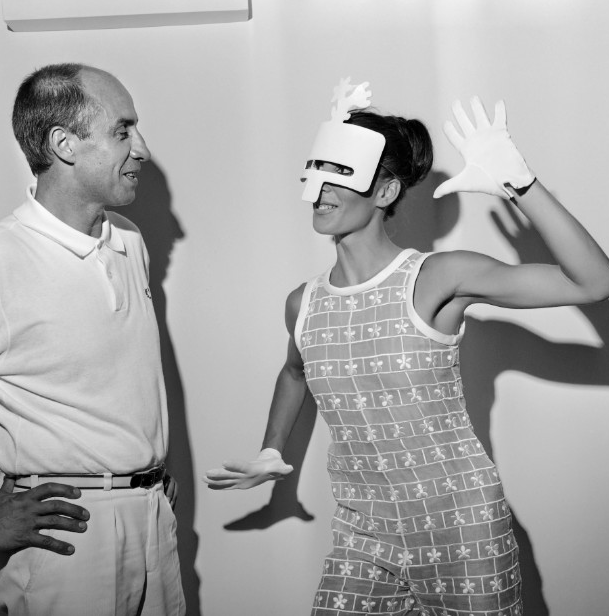 “Where do his tennis dresses, his sailor dresses come from? Where did he find them? On the steps of Delphi. In the wardrobe of Electra. They are modern and they are antique,” wrote Violette Leduc in a piece entitled “Is Courrèges Wearable?” published on Vogue in 1965.

André Courrèges was an inspiration for many modern designers. He died after a long battle with Parkinson’s disease in Neuilly-sur-Seine. Born in 1923 in Pau (in the French Basque country), Courrèges was educated at the National School of Civil Engineering. In 1944 he served as an Air Force pilot based at Aix-en-Provence. Courrèges enrolled at the training college for the clothing industries in Paris in 1946 and was taken as a designer at the Jeanne Lafaurie couture house the following year.

He started working for Balenciaga in 1951 where also Coqueline Barrière, later on his creative partner and wife, worked. Ten years later André and Coqueline established their own Paris couture house and moved into a flat at 48 Avenue Kléber after borrowing money from Balenciaga (who, years later, refused to be paid back by the couple).

In 1962 he designed a collection with trousers for day and evening (trousers were usually deemed an informal item of clothing, Courrèges introduced slim, tapering trousers for everyday and smart wear), while in 1965 he caused a sensation with a collection of mini dresses.

He also produced around the same year his iconic white kid open-toe boots with cut-out top and the timeless Inuit-inspired white plastic sunglasses with a slit that followed the curve of the eyelashes (a design made famous by a Peter Knapp picture of Madame Filipacchi wearing them, but also sported by other famous people including Salvador Dali and Sun Ra).

A special dynamism pervaded his designs: Courrèges’ clothes such as his simple striped outfits and trousers and jackets with a navy grosgrain braid were clearly made with a childish glee and a passion for a fast and joyful life in mind; they represented a new lifestyle perfectly captured in the pictures by Willy Rizzo or William Klein, featuring models clad in Courrèges pieces at times dancing, jumping in the air or energetically moving around.

“The woman who interests me doesn’t belong to any particular physical type. She lives a certain life, however. She is active, moves fast, works, is usually young and modern enough to wear modern, intelligent clothes,” the designer stated in a 1965 interview.

Courrèges was mainly inspired in his stark shapes and streamlined silhouettes by a combination of Futurism and Russian Constructivism, though he also had links with the Bauhaus, but his secret stood in his thick fabrics including double-sided wools, gabardine and heavy twills (later on he included PVC in his garments), while a palette of primary colours in which white (inspired by white-walled houses, Basque pelota players dressed in white playing against a white wall and Coqueline’s father’s clothes), red, yellow, and silver prevailed, prompting critics to label his garments as “Space Age” designs (for the Autumn/Winter 1968-69 season he designed white capes that, matched with figure-hugging body stockings, made his models look like cosmonauts).

“Luxury in clothes to me has no meaning,” Courrèges stated about Haute Couture, “It belongs to the past. My problem is not rich embroidery, useless lavishness – it is to harmoniously resolve function problems – just like the engineer who designs a plane, like the man who conceives a car. There is no real difference between them and me and, like theirs, my place should be in the anonymous shadow of a laboratory.”

In 1968 Courrèges built a factory in Pau: describing it in 1975, Le Monde emphasised its futuristic architectures with a semi-transparent roof that could be opened, glass walls, and staff working in contact with nature.  He continued to be inspired by modernism and futurism, but was also influenced by art, design and architecture.

Though his textiles and tailoring were not easy to copy, Courrèges’ ideas were widely adopted and recreated even in more recent years by many different fashion houses and brands including Prada, Marc Jacobs, Miu Miu and Dior, proving he has been a genuine visionary.

Courrèges did manage to preserve his integrity even when he made garments for famous clients such as the Duchess of Windsor and always demanded to be paid for his work, so that celebrities would never get any special or preferential treatment (“Monsieur Balenciaga is a grand seigneur, a nobleman, used to dressing noblemen’s wives. Never does he lose his grand manners. But his house, in turn, stretches flat like a carpet in front of any of Monsieur Balenciaga’s famous customers. Not here,” Courrèges explained). Any regrets? Maybe one: “Le Corbusier is my only master. If I had the guts, I would leave it all today to become an architect,” the designer once stated. Maybe it was better that way: the loss of the architecture world was indeed the gain of the fashion industry. Yet André and Coqueline remain part of a very different generation of designers: he worked for Balenciaga for ten years developing great skills in cutting garments; they were financially helped by Balenciaga (who didn’t want their money back), while nowadays huge fashion groups pump money into labels that then quickly lose their identity and design integrity.

iThere are no comments